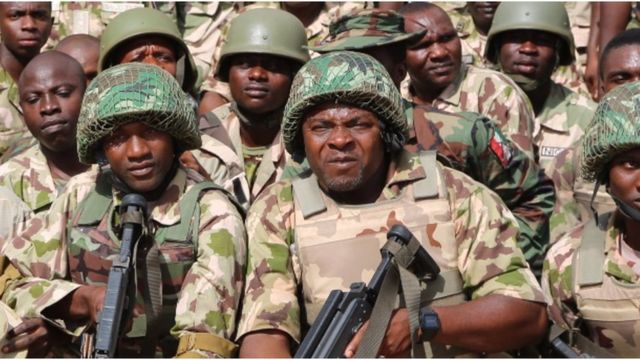 A group known as the Borno Emirates Concerned Citizens Forum has called on the Federal Government and the Military in particular to be proactive in tackling the deteriorating security situation in Borno and Yobe  states.

Briefing newsmen at Press Conference held at the NUJ Pres Centre, Maiduguri, the Chairman of the group, Zanna Hassan Boguma, said the military should be proactive rather than reactive by changing their strategies to end the war against Boko Haram.

The forum also appealed to the Borno State government to rethink over the resettlement of internally-displaced persons taking refuge at various IDP camps within and outside the State with the renewed and increasing attacks on towns and villages by the Boko Haram insurgents.

Zanna Boguma said:  “It is apprehensive to note that the recent escalation of insecurity in Borno and Yobe  States frightening..The spate of attacks by the dreaded Boko Haram Insurgents in recent times has evolved to ridicule the security formations in the Northeast sub-region.

“The Borno Emirates Concerned Citizens Forum expressed dismay, over the recurring attacks on military formations and the subsequent eviction of constituted authorities in Damasak, Geidam and Minok by the dreaded Boko Haram Insurgents.

“There is need for a thorough investigation and reorganization of the security architecture. The time of shifting blames on civilians is over because looking at the

recent mass exodus in Damasak and Geidam, our people are helpless and no living soul will invite such wrath upon themselves.” the Forum stressed.

It believes the missing links and relax in security watch is to be blamed and that the repeating same tactics by the security formations is strengthening the insurgents.

“We are calling on the security agencies to as a matter of urgency have a rethink and change security measures to avoid further deterioration. It is glaring that the nation’s security outfit is drifting and the wider it becomes, the more bad elements seize the opportunity to create a non-refillable vacuum”.

The Forum further called on the Presidency, to immediately summon a national security meeting to address the lingering and resurfacing of insecurity in the country while anticipating submitting a memorandum on the need to reintroduce the Joint Task Force to support the overstretched military in the restoration of peace in the land.

“We also want to suggest that the Presidency should inaugurate a state Security Council that comprises independent bodies coupled with heads of governments and security leaders in the States of the Federation. The council should have a direct link to office of His Excellency, President Muhammadu Buhari. We further suggest that the constitutional role of Traditional Authorities be revised to have a say on issues related to security and other prominent issues”, Hassan said.

The Forum argued that disregarding the traditional system and the subsequent adoption of foreign administrative style has created a vacuum that leads to the current state while equally appealing to the NSA, CDS, IGP, DG DSS, to be on their toes ahead of these criminals all over the country.

“If at all the NSA will address the Nation by telling us that there were many prominent Nigerians including very highly positioned traditional rulers involved in so many acts of criminal activities, what are they waiting for?;, they should be fished out and dealt with accordingly”,  Boguma added.

The Chairman said the encounter in Mainok was pathetic but preventable, admonishing that the Super Camp Strategy be revisited by decentralizing the formations to spread on four cardinal directions, saying that ‘”doing this, we believe the enemies cannot have the capacity to attack at the same time and at four fronts. We also wish to suggest the camps should increase the number of OUTPOST formations to serve as an alert mechanism to those in the camps. ”

“Enough of losing our brave soldiers to these mad murders. We call on all well-meaning Nigerians to embark on massive invocations for peace to reign in Nigeria. We call on the Muslim faithful to adequately utilize the blessed month of Ramadan to pray for Nigeria”, Hassan said