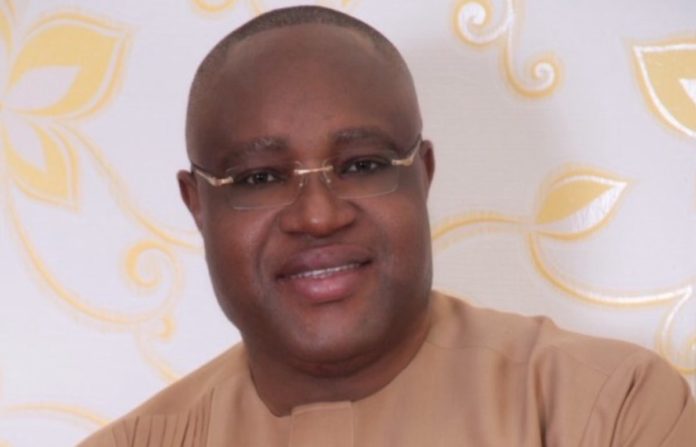 Dr. Gabriel Ifeanyi Ogbechie a seasoned leader, engineer, administrator, serial entrepreneur, oil Magnate and Group Managing Director of Rainoil Ltd is one man who has demonstrated a great capacity to lead men where they ought to be and shown that nothing so conclusively proves a man’s ability to lead others as what he does from day to day to lead himself.

The measure of  this great man of our time is seen in terms of the strength of his leadership commitments, the genuineness of his friendships, the sincerity of his purpose, the quiet courage of his convictions, his capacity to suffer and his willingness to endure in order to achieve success and put smiles in the lives of many.

Deride him with every fibre in your vein, treasure him with every air you breathe or be apathetic to his style, philosophy, and essence, Dr. Gabriel Ifeanyi Ogbechie is a man you could say is still striving for excellence at 54.

He is clearly one of the leaders in the downstream sector of the oil and gas industry in Nigeria, that has distinguished himself not only as a dynamic business administrator, innovative director and technocrat but also shown a high degree of integrity and transparency in both private, religious, and public affairs.

His ingenious, creative, pragmatic, and resilient approach to Business and leadership has brought a lot of transformation to his Rainoil Limited, an integrated downstream oil, and gas company, which is a prominent player in the Nigerian oil industry. The company’s operations span across the downstream value chain i.e. Petroleum Product Storage, Haulage/Distribution, and Retail Sales.

As a man who believes in a resilient, proactive, innovative, and strategic type of leadership,  Ogbechie stated that Rainoil is built to survive in any clime. “We run a company that is not dependent on Gabriel Ogbechie or his children, anybody can come in as a management trainee and years down the line, aspire to become Managing Director. Let those who own the business be sure of their dividends rather than depending on the children of the founders to be the ones who must run the business. They can own the business but not necessarily run it,” he said.

The oil magnate revealed that of all the world’s great figures, he wishes he had met a man like Nelson Mandela because he is a global icon. “A man who was incarcerated for more than 25 years, yet he came out, forgave those who persecuted him. An African, who was elected to be president of his country, ran for one term and said he wasn’t running for a second term.

In his attempt to give back to the society from the prosperity heaven has bequeathed on him, the Rainoil boss established the Gabriel Ogbechie Foundation. “We have a lot of people on the scholarship scheme, a lot of people I do not know. We pay school fees, medical bills, and all kinds of support. At the corporate level, we have an annual budget for CSR where we pay all kinds of bills and give support. As God blesses you, you must find a way of giving back to society, it is something I am very passionate about.

Absolutely, his character and actions epitomize the true face of right living, patriotism, nationalism, and optimism as he is leading a new agenda for pure corporate governance and integrity in the market place.

As the founder and Group Managing Director Rainoil Limited. He has almost three decades cognate experience in the Nigerian oil and gas industry and has also made a strong commitment in the development of sports in Nigeria, through sponsoring of annual Rainoil tennis tournament.

A graduate of Production Engineering from the University of Benin, Gabriel began his early career as a factory engineer between 1989 and 1991, and subsequently joined PricewaterhouseCoopers, a leading firm of Chartered Accountants and Management Consultants.

He also spent four years at Ascon Oil, heading the Sales and Operations Unit. At a time of limited indigenous participation, he identified opportunities within the downstream oil and gas space. In 1997, he founded Rainoil Limited, which he has guided from very modest beginnings to a company with operations across the downstream value chain.

He has been involved in many philanthropic causes through the establishment of The Gabriel Ogbechie Foundation in Delta State which provides scholarships to undergraduates, community healthcare services as well as youth employment initiatives. Also, through the Rainoil Community Empowerment Programme, he focuses on financial support to orphanages in Lagos and Abuja, and the provision of physical infrastructures and public amenities in local communities in Delta State.

Gabriel Ogbechie is a pioneer member of the Lagos Business School Owner Manager Programme 2002. He was awarded an Honorary Doctorate (D.Sc.) of Technology Management by Novena University, Ogume, Delta State in 2016.

His company has remained a wholly indigenous-owned company throughout its existence and  still plays a fundamental role in bettering both the local economy and society, it also  further reflected by the business’s sound and responsible approaches to health, safety, and the environment

He is happily married to his wife, Godrey Ogbechie  who is also Group Executive Director of Rainoil and they are blessed with children.

The leaders and people of Idumuje-Ugboko, Aniocha North Local Government Area, Delta State  where he hails from described  Dr. Gabriel Ogbechie, as one of the greatest ambassadors of the community and LGA ever.

The leaders commented that `In spite of his wealth which he uses generously for the benefit of people without regard to gender, language, religion or ethnicity, Gabriel Ogbechie, is a successful businessman in his own right and remains humble and easily approachable.

To them he socialises with the mighty and the downtrodden, dining with the poor and dancing with villagers at local meetings. He participates actively in local functions where he frequently admonishes the young never to give up despite the vicissitudes of life.

His Governor, Ifeanyi Okowa of Delta state said Ogbechie is an illustrious son of Delta who had through numerous investments in oil and gas, agriculture and other business concerns, contributed immensely to the growth and development of the state.

He said that Ogbechie’s contribution to the state was heart-warming and worthy of emulation and urged other indigenous investors to emulate the sterling accomplishments of the Rainoil boss.

The governor remarked that for his outstanding contributions to the development of the state, Ogbechie had etched his name in gold in the annals of the state.

“I rejoice with my brother and friend in whom I am well pleased on the occasion of his 54th birth anniversary. “Through dint of hard work, focus, and perseverance, he has built Rainoil to become one of the most successful downstream petrol outfits in Nigeria.

“Of more importance to us is that almost all his investments in oil and gas as well as agriculture are sited in Delta, and he is, therefore, contributing immensely to job creation, taxation, and corporate social responsibility to the host communities.

“On this special day of his birth anniversary, on behalf of my family, the government and people of Delta, I join his family and well-wishers in celebrating a life of great accomplishments and outstanding patriotism with which God has blessed him. “It is my prayer that he will continue to grow in business and enjoy robust health many years ahead.” The Governor stated.

As we celebrate the life of this Corporate Leader and icon at 54, a man of great repute, leader of men, a man with dignity, an achiever, a man of the people for the people, a Philanthropist  and Christian per excellent Gabriel Ogbechie, philosophy of his life  is fortified by his deep personal commitment to the self-worth of work being more treasured and ensuring he put smiles in the life of many.

Apparently, Gabriel Ogbechie stands high as a real Nigerian Business Leader from the South-South. His love for God and humanity is highly contagious, it stands him out as an outstanding Nigerian corporate leader and nationalist. He is without question a visionary entrepreneur Nigerian who has over the years been working modestly to support all kinds of people, essentially the indigent.

Partnering with Nigeria through CSR- The Chevron Nigeria Limited’s experience