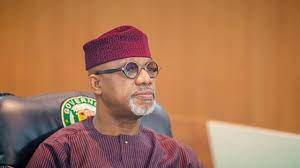 ABEOKUTA – The Chairman, New Nigeria Peoples Party (NNPP), Ogun State Chapter, Olaposi Oginni has attributed the indefinite strike action embarked upon by workers in the state to the incompetence of Governor Dapo Abiodun to manage the economic resources of the state.

Oginni in a release signed and made available to newsmen in Abeokuta on Tuesday, said NNPP as a party is in solidarity with the great Workers of Ogun State.

Comrade Oginni, however, call on Governor Dapo Abiodun to heed to the workers demand without further delay.

In his words “Ogun State cannot afford to go on prolonged industrial strike. Our Schools and Hospitals are shutdown by industrial action. This strike must be halted by Gov. Abiodun before much damages are done to the future of our children and citizens health!”

The NNPP Chairman expressed happiness with the strike action, saying it happened at a time of the election period.

He said the mismanagement of the workers’ 21-month salary deductions would help “the great workers of Ogun State to take right decisions of voting right with total rejection of APC and Prince Dapo Abiodun at the coming General Election.”

Similarly, the governorship candidate of Peoples Democratic Party (PDP) in Ogun state, Hon. Oladipupo Adebutu has expressed his deep concern over the poor treatment meted out to civil and public servants in the employ of the state government.

Adebutu, in a statement issued on Tuesday by his Media Director, Afolabi Orekoya, decried the insensitivity of the Governor Dapo Abiodun-led administration to the plight of workers who had embarked on strike.

The PDP candidate empathized with the organized labour in the state, saying he understood their agony and pains as a result of lack of compassion by the incumbent administration of the All Progressives Congress (APC).

He bemoaned the non-remittance of worker’s deductions for 21 months, non- payment of statutory allowances and pensions; as well as deliberate breach of the State Pension Reform Law, 2006 (amended 2013) in the implementation of the Contributory Pension Scheme.

Adebutu noted that it was sheer wickedness for a government to engage in a one-sided practice of the Ogun State Pension Law [2006] amended in 2013; where the government was faithfully to the monthly deduction of 7.5% of Basic salary from all State employees whilst the counter part payment of 7.5% from the State Government, as the law stipulates was zero.

According to him, the industrial action by workers would further compound the economic woes and losses of the state if not urgently addressed.

He said, “It is very sad that a government that enjoys the services of the diligent workers owes four (4) years out of eight (8) years of unpaid Statutory Leave Allowances.

“It is disheartening that our dear state is being governed at this time by a crop of incompetent and inexperienced people who lack human feelings, hence, its failure to give approval to the payment of Gross Salary of workers which has led to the the accumulated owings. This is shameful.”

“It is evident that the government of APC in its entirety lacks compassion and a sense of purpose. If the Federal Government can turn deaf ears to the cry of ASUU for months not minding the decadence and adverse effect of the indefinite strike of the University staff will have on the educational standard; what will one expect from a self-professed baby Governor who has also damned the strike warnings of the workers of Ogun State?”

Adebutu, according to the statement, assured the workers that this ugly time shall pass.

“Once we are given the opportunity to serve in 2023, we shall run a more responsible, responsive and compassionate government with human feelings that will take workers’ welfare as priority,” he added.

While appealing to the workers to be peace-loving in the course of pressing for their rights, Adebutu said he identifies with the workers and hopes that God quickly touches the hardened heart of the Governor and his team to do the needful.

173 Million Nigerians At Risk Of Malaria Infection…..Minister, Who

Ohanaeze Celebrates Igbo 2022 With Resolve To Produce Nigerian President of...