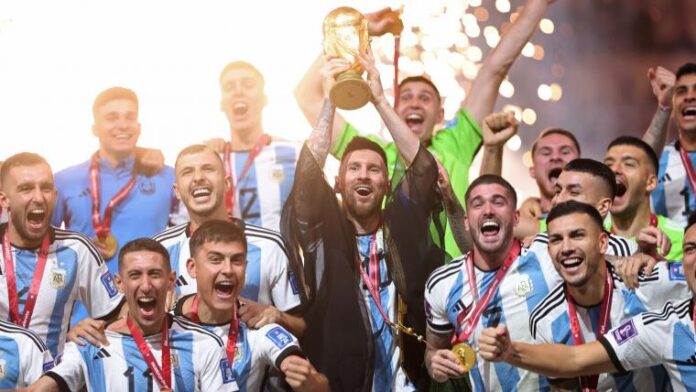 Lionel Messi and Kylian Mbappe were the stars of both sides in what will go down as one of the most enthralling World Cup finals which ended 3-3 after a pulsating 120 minutes of extra time.

Didier Deschamps looked to become only the second manager to win two separate World Cups, and he made two changes to the side that beat Morocco on Wednesday.

The final was the eleventh World Cup final competed between a South American and European nation; South American sides lifted the trophy on seven of the previous 10 occasions. However, Argentina are responsible for two of the three such defeats (against Germany in 1990 and 2014), while France are responsible for the other win (3-0 v Brazil in 1998).

Lionel Messi stepped up and tucked the ball perfectly into the net.

Dayot Upamecano lost possession of the ball leading to a quickfire counterattack. Messi flicked the ball brilliantly onto the path of Mac Allister who unselfishly found Angel Di Maria.

The PSG forward let fly a first time shot that nestled into the far bottom corner. At this time it seemed the Albeceleste were cruising to the title.

France however reduced the arreas in the 80th minute when Kylian Mbappe converted from the penalty spot after Kolo Muani was brought down in the box by Nicolas Otamendi.

Mbappe a minute later then restored parity when he turned and on a half volley unleashed an unstoppable volley beyond the reach of Emi Martinez.

Messi had a chance to win it for Argentina in added time but his powerful shot from long range was tipped over the bar by Hugo Lloris.

The game went into extra time. Messi again scored and Mbappe responded with the game ending 3-3 after 120 minutes of football.

Also, Argentina have won their first World Cup in 36 years and some months after defeating France 4-2 (3–3 after extra time) in a penalty shoot-out to win the World Cup for the third time in Qatar on Sunday.

This is Argentina’s third World Cup trophy from six final appearances in history after defeating defending champions France to win the biggest prize in men’s football – with the legend himself getting on the scoresheet twice.

Argentina last won the World Cup in 1978 and 1986 and lost in the final three times, but Messi has finally broken the jinx in Qatar.

In a match dominated by attention on Messi and Kylian Mbappé of France, it was Messi’s experience that ruled the day.

Mbappé also netted twice in two minutes late in the second half to force extra time, before completing a World Cup Final hat-trick in the extra period to force the shoot-out.

Mbappé became just the second man in World Cup history to score a hat-trick in the final after Geoff Hurst in 1966 and won the Golden Boot for top goalscorer (8 goals), but ended up on the losing end.

Messi’s double saw him finish the tournament with seven goals and signed off from his World Cup career with a medal.

Mbappe was named the Silver Ball winner as the second best player in the tournament and Croatia’s Luka Modric picked up the Bronze Ball after guiding his country to third place.

He played every minute of the tournament and saved Frenchman Kingsley Coman’s spot-kick in the final shootout.

Argentina and Benfica midfielder Enzo Fernandez, 21, was named Young Player of the Tournament after a string of impressive performances in Qatar.

He started the final win over France and scored his only World Cup goal in the 2-0 victory over Mexico in the group stage.

Elsewhere, England won the FIFA Fair Play Trophy for the fewest bookings throughout the tournament.

Meanwhile, Excitement has taken over the timeline on Twitter following the return of singer, Davido, to social media and his performance at the closing ceremony of the World Cup in Qatar.

Davido performed the soundtrack of the World Cup, Hayya Hayya (Better Together) alongside other artistes at the closing ceremony which held at the Lusail Stadium in Qatar on Sunday.

Meanwhile, reactions have trailed his stellar performance at the game.

Music producer, Samklef couldn’t hide his excitement as he tweeted a video from the performance where he said, “OBO, our king is back.”

DJ Neptune also joined with a welcome tweet, saying, “#davido, we are so happy to see and watch you perform ”

Onyeali-Ikpe, Banda, others listed amongst Outstanding African Women for 2022