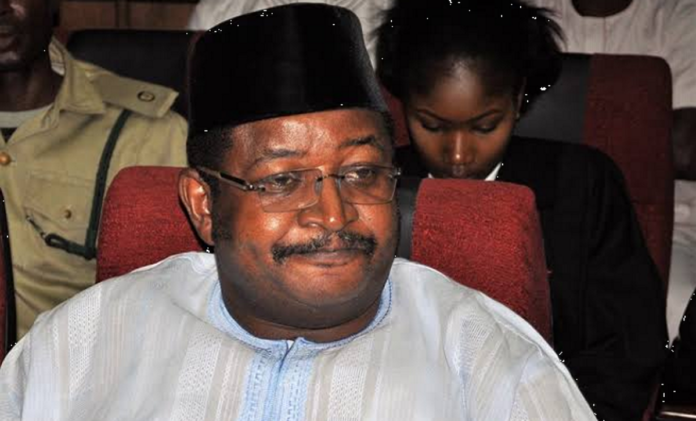 A former Group Managing Director of the Nigerian National Petroleum Corporation, Mr. Andrew Yakubu, opened his defence on his ongoing trial at the Federal High Court in Abuja on Wednesday.

Yakubu, who testified for himself as the first defence witness in the case, told the court that he was contemplating using the sums of $9,772, 800 and £74,000 for business before they were seized by the Economic and Financial Crimes Commission on February 3, 2017.

The EFCC had, on a tip-off, raided Yakubu’s house located on Chikun Road, Sabon Tasha area of Kaduna South Local Government Area of Kaduna State, on February 3, 2017, when they recovered the funds kept in a safe.

He was, in March 2017, arraigned on six charges in connection with the recovered money.

Following his no-case submission, which he filed after the prosecution presented its case, Justice Ahmed Mohammed, dismissed two of the counts in a ruling delivered on May 16, 2019.

The Court of Appeal in Abuja also in an April 24, 2020 judgment affirmed Justice Mohammed’s ruling and dismissed two additional counts.

This left Counts 2 and 3 for Yakubu to defend.

Both the EFCC and the defendant had appealed to the Supreme Court to contest the various parts of the Court of Appeal’s judgment.

The remaining two counts, which Yakubu was ordered to defend by the Court of Appeal are about allegations that between 2012 and 2014, in Abuja, Yakubu allegedly received cash payments of $9,772,800 and £74,000 without going through a financial institution, in alleged violation of section 1(1) of the Money Laundering Act, 2011 and punishable under 16(2) (b) of the Act.

Opening his defence on Wednesday, Yakubu, who was led in evidence by his counsel, Mr Ahmed Raji (SAN), said the money seized by the EFCC was kept at the location in tranches and not in bulk.

He said he received about 97 to 98 per cent of the money as gifts during his birthdays, thanksgiving services and daughters’ weddings, among other celebrations he hosted after he left office as the GMD of NNPC.

Yakubu said, “As I stated in my statement to the EFCC, the money found in the safe is mine. The money was not received in bulk. It was received in tranches of not more than $10,000 and not more than £5,000 (in respect of the pounds sterling).

“And substantial part of the money was given to me after I left office. It was given to me on occasions such as birthday, thanksgiving services, and other celebrations that I hosted after leaving office.

“Since the money was given to me unexpectedly, I kept the money in the safe pending when I decide on specific business venture I would embark on. As soon as that decision crystallized, the business would be funded through the financial institution.”

He confirmed that his brother, Mr. Bitrus Yakubu, was present when the EFCC conducted a search on his premises in Kaduna, where the money was recovered.

Justice Mohammed adjourned the case till July 22 for further cross-examination of the defendant.

Death, chaos as fuel tanker falls in front of army barracks In Lagos

Wike storms Nunieh’s home, leaves with her for Govt House

US partners with Lagos State on electrification development