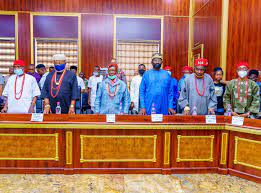 The chairman Imo state council of Traditional Rulers  traditional council of Imo state,  Eze Dr.Emmanuella Okeke  received  the management of the Direct Foreign investment and new industries DFI, and  the Korean investors in his office

According to the  visiting Investors guided  by the state commissioner for budget, economic  planning and statistics  Dr CC Osuala, they came to interact with  the state  traditional  rulers on the significance of the  diaspora smart city

However speaking, the Commissioner explained the benefit of the smart city pointing out that the state would immensely benefit from the project when completed

The leader of the Korea investors team Mr Peter Yoon while speaking  presented the master plan for the smart city to the monarch, and  assured the people of the state of his team’s commitment to make judicious use of the lands allocated for the project.

He reiterated that the smart city will have in it all the components needed for day to day living of it residents. It will enhance the growth and development of the state through job creation and availability of the right infrastructure, Peter Yoon said.

Eze Okeke in his response commended the governor for his developmental approach, he equally salute the Honourable commissioner Hon CC Osuala, the management and staff of the DFI led by the General Supervisor Dr Princess Chidimma Onuoha for their relentless efforts in ensuring that the project is actualize in the state.

He gave his royal blessings to the investors while praying for the success of their investment in Imo the state.