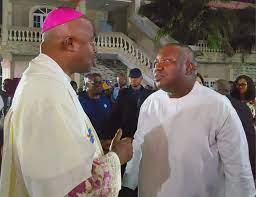 The Bishop of the Catholic Diocese of Enugu, Most Rev. Dr. Callistus  Onaga, has expressed gratitude to God for the cooperation that exists between the Church and the administration of Governor Ifeanyi Ugwuanyi in Enugu State, describing it as “wonderful”.

Bishop Onaga who spoke at this year’s Festival of Nine Lessons and Carol, held at the Holy Ghost Cathedral, Ogui, Enugu, yesterday, stressed that the Catholic Diocese of Enugu has enjoyed a harmonious relationship with Governor Ugwuanyi’s administration.

The Bishop prayed for “a very wonderful conclusion of this very administration,” and further implored God to grant Governor Ugwuanyi and his team the spirit of fortitude to uphold to the end.

Appreciating the positive impact of Governor Ugwuanyi’s administration since its inception in spite of the numerous nation’s challenges, Bishop Onaga said: “We know they are moving higher; Lord let them go higher. We know they are spending sleepless nights because of the situation; Lord if you do not keep watch over the city, in vain do the watchmen keep vigil. Keep watch with them. Heal the wounds that are there. And above all, bless them for the good works they have done these years of service.”

In his sermon which centred on Christ Jesus as a kingdom that has no end, and the need for mankind to live a worthy life and accept God’s kingdom in their hearts to reign with Him forever, the Auxiliary Bishop of Catholic Diocese of Enugu, Most Rev. Dr. Ernest Obodo, used the opportunity to applaud Governor Ugwuanyi for his commitment and dedication to the Festival of Nine Lessons and Carol in the diocese since he assumed office in 2015.

Bishop Obodo disclosed that the governor has participated constantly in the annual event and has exhibited high sense of leadership qualities as a peaceful, visionary and people-oriented leader in the discharge of his responsibilities, saying: “Your Excellency, we thank you; you are a man of peace and a man who finds himself in his people. You go wherever your people are; when they are rejoicing you rejoice with them; when they are sorrowing, you sorrow with them.”

Speaking further on Governor Ugwuanyi’s exemplary leadership qualities, the Diocesan Secretary and Chancellor of the Diocese, Rev. Fr. Wilfred Agubuchie, revealed that the governor has two unique qualities of “being able to combine civil life with your catholic faith and your capacity to live out; live by the principle of subsidiarity that says what individuals can accomplish by their own initiative and effort should not be taken away from them by a higher authority.”

The priest thanked Governor Ugwuanyi for his untiring efforts to make Enugu State better against all odds as well as his presence at the religious event, stressing that the diocese cherishes them.

“Your Excellency, in many areas, some tasks are beyond the Church and immediately, you will always come in to intervene, that is the principle of subsidiarity and you are living by it. Thank you very much and may God continue to bless you,” he said.