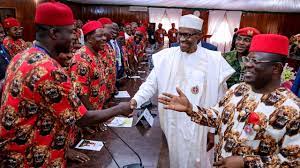 The Indigenous People of Biafra (IPOB) Thursday advised Governor Dave Umahi of Ebonyi state to forget his presidential ambition as the Fulani would not give it to him let alone Nigerian People.

Giving the advice, the IPOB image maker, Emma Powerful, said that, “our attention has been drawn to the fallacious and laughable statement credited to the governor of Ebonyi state, Eng. Dave Umahi who as usual was ranting and calling Igbos liars, calling IPOB family group liars and claiming that fulani people were not killing or burning down properties belonging to Biafrans in Biafra land and anywhere in the country”.

“Well what else can you expect from a man who does not know his actual roots? Such statements from a very insecure man does not surprise or bother us in the least because we know where he is coming from and where he is irretrievably heading to.

Any individual or politician who ridicule his people because of politics will certainly reap the reward of such misadventure and David Umahi will not be an exception. People should ask David Umahi why  no  fulani terrorists governor in the North or politician ever condemn the activity of fulani terrorists like bandits, Boko Haram and other terrorists groups rampaging the North but they will ask him to prove his loyalty by condemning and killing those he claim are his people.

Thank CHUKWUOKIKEABIAMA for IPOB and our great leader Mazi Nnamdi the fulani would have pursued governor Dave Umahi out from Ebonyi state since two years ago.

Acquiring certificates does not confer common sense to the acquirer that is the sorry and pitiable state David Umahi has found himself in. For him to say that Ebonyi state is not part of Biafra means that he is suffering from chronic delusion and mental paralysis.

Who told him that he has the mandate of our people in Ebonyi state to decide for them? David Umahi at best can only vote as an individual during referendum, and he is entitled to cast his vote for Nigeria for all we care but we assure him that during referendum his family members will vote for Biafra not Nigeria.”

“The governor of Ebonyi state Dave Umahi is on record lamenting the atrocities committed last year by fulani terrorists masquerading as herdsmen who attacked part of his state and murdered over 100 innocent citizens of the state. Now he is suddenly suffering from amnesia and no longer has any recollection of his senses. Leaders my foot.

Fulani Herdsmen have been pillaging and  killing innocent citizens in the states of Enugu, Anambra, Abia, Imo and Ebonyi States forna very long time now. Gov. Dave Umahi has forgotten  where he was shedding tears because of the level of killing which fulani did in his state last year  but today, because he wants to use the blood of our people as a bargaining chip for his unattainable selfish political ambition.

Oh I forgot he was shedding the politicians insincere crocodile tears then and he must  exonerate the fulani terrorists herdsmen in Nigeria and blame the innocent victim and peaceful Igbo and Biafrans for these killings.

David Umahi may be blind to the foot print of the wanton killings of innocent civilian’s by the fulani Herdsmen adjudged the 4th most deadly terror group in the world, but this is not hidden to the world and the international community understand how fulani murder innocent citizens in the whole of Nigeria and not only in our region and igbo land but in all states and regions.”

He should therefore stop exhibiting his stupidity to the world to see and begin to ask if this man is not an Igbo man. The whole world today understand what IPOB is fighting for and we must get it.”