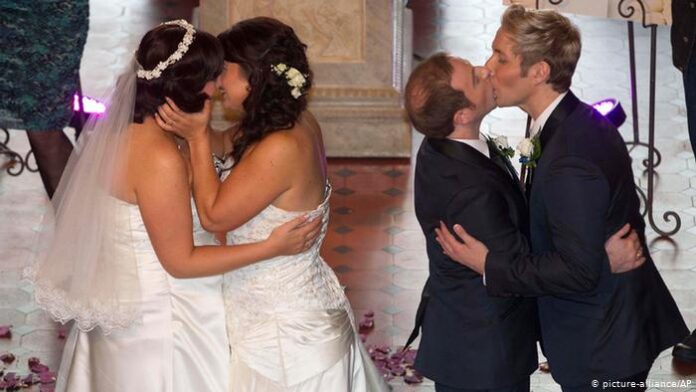 .LGTB should not adopt child, you can’t have what you deliberately denied

Nigerians have reacted negatively   to the alleged threat by the new American president Joe Biden to sanction countries including Nigeria that are operating anti- gay laws.

Most members of the clergy and Christians who spoke to our correspondent in Owerri Imo State capital vehemently opposed gay marriage saying ” it is not our culture ” and “it is evil and ungodly as such we will resist it”.

According to the general overseer of a Pentecostal Church in Owerri, God’s Kingdom Church Inc, Pastor George Ndukwe Azunna the people of God should not surprised at this development as the Bible has revealed that towards the end time, too many wrong things would come to play.

He admonished Christians to remain steadfast and focused on their fate of worshiping God in truth and in spirit.

Pastor Azunna said that God in his wisdom must frustrate all the evil plans including forcing gay marriage on the people by the latest American president.

He urged Nigerian Government not to bring destruction to itself and citizens by succumbing to Biden’s pressure.

However referring to the book of Deuteronomy, Pastor Azunna recalled the commandments of God where he forbids men marrying fellow men or men using women apparel.

According to him, the wrath of God awaits any human being going contrary to God’s injunction.

Reactions have continued to trail the recent threat by US President Joe Biden to impose financial and visa sanctions on nations including Nigeria with Anti-Gay Laws as Politicians and religious leaders bore their mind on this  burning issue that has posed as a threat to the Sovereignty of the Nigeria State and most importantly her faith on God.

Pastor Akpamgbour, the General Overseer of He Resign Chapel Karshi said that the contemporary liberal system upon which USA claimed to hang it policy thrust, also provided an elaborate opportunities for countries of the world to decide nations of relation and that Nigeria should as a matter of sovereignty, be what it should

In his words: “Nigeria as a country must at least for once,  insists on the principle and philosophy of our founding fathers because jittery and swaying  by the USA may amount to losing our faith in God and our country Nigeria”

On his part, the national chairman, Justice Must Prevail Party (JMPP)   Amb. (Dr.) Olusegun IJAGBEMI-OLORUNTIJINDE flayed at the threat by President of the United States of America, Joe Biden, to sanction Nigeria and other countries that fail to make laws to accommodate Lesbian, Gay, Bisexual, Transgender and Queer and Intersex (LGBTQI) people on unequivocal terms and wishing to urged Pesident Muhammadu Buhari to continue to ignore the threat.

According to him “If such diplomatic arms twisting was behind Biden’s appointment of several Nigerians into cabinet position as a way of laying a soft ground to pressure Nigeria into such an abhorrent sexual orientation, then, it would fail with Nigeria whose leadership is strongly focused on their divine assignments for Nigeria which essentially is to prepare the nation for the birth of a new corruption-free Theocratic Eternal Justice Has Prevailed Government (TEJHPG) under the JMPP.

“Nigeria should rather stand for truth, justice and equity than in the fear of losing pecuniary gifts of visas and financial inducement and appropriately guide other nations looking forward to Nigeria for leadership on this matter.

LGTB should not adopt child, you can’t have what you deliberately denied

In an interview with our correspondent Pastor Dan Ukpabi  of Revival Assembly Lagos said that it is wrong for President Joe Biden to take such awful decision and called on nations all over the world to stop LGBT from child adoption because it wrong to give them what the deliberately denied to have.

Also, Mrs. Ifeyinwa Metu a child care giver with HOPE for Nigeria said that each country is guided by her values and culture and it is wrong  for the US to impose their LGBT values on nations all over the world.

She insisted that the US should respect the culture and values of other nations. According to her, ‘’a situation where the US is not allowing people to practice the cultural values is simple stigmatization from the president.”