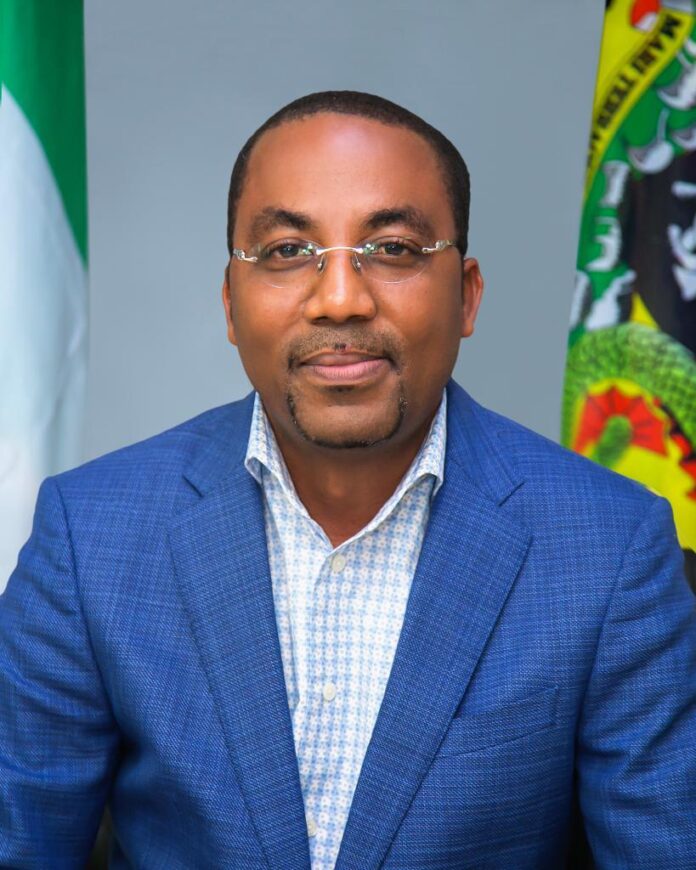 Since ,President Muhammadu Buhari approved the appointment of Mohammed Bello-Koko as the Substantive Managing Director of Nigerian Ports Authority (NPA), Which  takes immediate effect. The NPA boss has effectively shown great Leadership in the  way he thinks and  acts and, most importantly, have shown efficiency in the way he communicates .

On assumption of office, Koko promised to turn the organization around and ensure Nigerian ports are the most efficient in Africa. He is doing that and more. For Koko, the first order of business on ascending the saddle was to initiate fresh initiatives targeting cost and value maximisation by infusing greater efficiency in NPA’s diverse operations, plugging income leakages and cutting down on administrative overheads. The quick impact of this course could be felt. There are more. Any staff of the multifaceted organization will tell gladly today that they have never had it this good. Bringing his private sector experience to bare, there has been improvement of the debt recovery and collection mechanisms, which triggered a remarkable decrease in the debt owed the agency for services rendered to stakeholders such as the NNPC Limited, international oil companies (IOCs) and other partners.

There have been malicious reports in a section of the media aimed at achieving certain goals and derail Koko. However, Mohammed Bello Koko has demonstrated impeccable professionalism, discipline and persistence to shake up the old-fashioned narratives at the nation’s premier maritime agency. And this is hardly a picnic. In effect, he came prepared. The Koko-led transformation, re-engineering and repositioning of the NPA speak to fundamental changes that are afoot at the apex maritime organisation. This swathe of changes may lead to an unwitting mix-up in the proper contextualisation and appreciation of their scope and significance. The imperative of disambiguating the NPA MD’s trajectory, over his first ten months in office, then becomes necessary.

Anyone who has been to Apapa in recent years will testify to the menace of truckers and the resulting gridlock on port access roads. Today, there is significant reduction in truck turn-around time due to successful monitoring of the E-Call Up System.  To minimize breakdown of trucks on port access roads, about 3,000 trucks have been inspected, certified and issued stickers to ensure safety and compliance with ISO certification requirements and Minimum Safety Standards (MSS). This lead to 65 per cent reduction in number of accidents recorded, arising from improved standard of trucks operating within the Port premises. The NPA, following Koko’s directive has enforced full compliance of trucks to E-Call Up regime and Minimum Safety Standard resulting in significant reduction in the traffic gridlock along the main Port corridor and the internal access roads through enforcements, proper batching, continuous access control mechanisms and movement of cargo via barge operations. To save the country the much-needed foreign exchange, Koko has ensured that complete Dry-docking of some Tug Boats are done locally and this has increased the authority’s fleet. To ensure adequate security at the ports, the NPA has procured and deployed six Security Patrol Boats (SPBs) to all Pilotage Districts to address incessant attacks of vessels along the channels and at Ports’ waterfronts. In the period under review, the NPA has ensure standardization of Operational Procedures for Different Activities, created Forcados Signal Station to enable the Port capture the movement of more Service Boats and completed bathymetric Survey for the dredging of Escravos Channels.

With vital things necessary for effective port operation lacking, what the NPA has achieved in the last 10 months is unprecedented. They include; the survey and Mapping of the FairWay Buoy up to Warri-Sapele-Koko Ports to the prescribed standards of the UKHO Charts, increase Container holding capacity at Rivers Port arising from conversion of unused space within PTOL Terminal into stacking area, provision of 24 motor cycles deployed to aid effective monitoring of Truck E-Call Up operation at Apapa/TCIPC/Ijora axis to ease free flow of traffic, signing of Memorandum of Understanding (MoU) with the National Bureau of Statistics (NBS) for data digitalization and exchange for effective integration of Ports statistics with National Database and upgrading of Website and Daily Shipping Position Portal. Others are the upgrade of infrastructure at Terminal ‘B’, Berth 7 and 8, Onne Port Complex based on Messrs WACT Nigeria Limited proposal for investment exceeding $110 million over a period of two years.

“The overall progress on all ongoing works is 75 per cent as at end of October, “competent source at the NPA told our correspondent. Completion of the construction of 6,000 metric tonnes Bitumen Tank in Rivers Port Complex to improve the company’s bitumen storage capacity which will ease their operations and have impact on the infrastructural development of the South-South, approval for the Completion of Road Network for the integration of Berth 9,10, &11 at Federal Ocean Terminal, Onne Port, completion of the modernization of Control Towers at Lagos Port Complex and Tin Can Island Port, installation of One Hundred and Eighty (180 Nos) Marine Fenders on all Quays Authority Wide for safe berthing were all achieved during the period under review.

Since appointment as substantive Managing Director/ CEO in February 2022, Mohammed Bello Koko has recorded several milestone achievements that has earned accolades and awards from several media organization. Nigeria today is battling revenue challenges due to unprecedented oil theft. The NPA under Koko has in the last ten months remitted billions of naira to the federation account, helping the federal government to mitigate the revenue challenge. He did this by tightening the collection mechanisms and plugging of revenue leakages that resulted in the unprecedented generation of the sum of N286 billion and the remittance of N103 billion as at October 2022 to the Consolidated Revenue Fund (CRF) of the federation. Building decaying port infrastructure has always been Koko’s dream, and he has done so with the Provision and installation of 86 number Buoys for Warri and Calabar Pilotage Districts. Other stellar achievements include; survey and Installation of Buoys at Ijegun/Kirikiri water channel, licensing and Upgrading of Pilots across the four Pilotage District, acquisition of Harbour Crafts (Tugboats, Pilot Cutters, and Patrol Boats, licensing of additional four truck parks to increase capacity of truck parks servicing the Lagos Ports and licensing of 10 Export Processing Terminals to facilitate exports at Nigerian Sea Ports. Four of these terminals are already fully operational.

For several years the Escravos breakwaters were left to rot, things are turning around for good following the completion of consultancy services for the shore protection and rehabilitation of the Escravos breakwaters by Royal Haskoning. The contract for rehabilitation will soon be awarded. The NPA has also completed review of expired concessions while reviewing all available funding options in order to commence immediate reconstruction of: TinCan Island Port Complex, Berth 4-14 in Apapa Port Complex, Berth 2 in Onne, Terminal C in Warri and Warri Jetties. Also, the synergistic partnerships at instituting transparency harbingered by the Mohammed Koko – led Management recently gained international commendation as Nigerian Ports won, “Outstanding Achievement in Collective Action Award,” of the Switzerland-based Basel Institute.

In its drive to take the lead in the effort by the federal government to diversify the nation’s economy and boost exports, the NPA last month commissioned Nigeria’s first Export Processing Terminal at Lilypond in Ijora, Lagos.

The facility, the NPA said, will ensure prompt and seamless processing of export cargoes accessing Apapa and Tin-Can Island Ports in Lagos.

Speaking, the Managing Director of the NPA, Mohammed Belo-Koko stated that the Export Processing Terminal will further enhance Nigeria’s non-oil exports currently in the region of $2.5 billion.

Bello-Koko said the export terminal will help Nigeria optimise the benefits inherent in the African Continental Free Trade Area (AfCFTA) agreement as greater efficiency will be infused into the logistics surrounding the entry of export boxes into the ports for onward loading on vessels.

Bello-Koko who commissioned the terminal, said the facility will help to reduce wastages and rejection of Nigerian export goods, and also reduce the time wasted before exports gain access to the port.

According to him, there have been several cases of rejection of export originating from Nigeria, which could be attributed to time wastages and spending longer time at the port, but the terminal will ensure speedy processing of exports.

He added that the initiative is in line with the NPA’s commitment to the implementation of the National Action Plan on agro-export and the federal government’s desire to diversify the national economy from oil to non-oil export.

He said the NPA is also working to integrate the Central Bank of Nigeria’s NXP (Nigeria Export Proceed Form) into the electronic call-up regime.

According to him, “The need for Export Processing Terminals is underscored by the limitations of current port facilities in the Lagos area which are operating beyond their built capacity for cargo handling. The export terminals will serve as holding areas positioned in Lagos and Ogun States to help exporters prepare the arrival at port terminals in view of the traffic management challenges that are visible in Lagos.”

He said the Nigerian Export Promotion Council (NEPC) has served as the technical partner of the NPA through the journey of setting up the terminals.

Also, he applauded the Nigeria Customs Service (NCS), for creating an export command, saying that the authority will work with the Customs’ export command to bring up seamless modalities that will govern export trade.

“We are also working to integrate barge and train movements to complete the circle in collaboration with Nigerian Customs. The movement of export boxes from the Lilypond Export Terminal shall be directly through Warehouse Road to cut down on time for arrival at the port. Similarly, movement of export boxes to Tin-Can Island Port shall be from the DiamondStar consolidation point at Emmadunamix Terminal in Okota,”he added.

Lastly, following its committed efforts at advancing trade facilitation, the NPA recently won the award of “Best Maritime Agency of the Year 2022” at the Daily Telegraph Newspaper Annual Awards held in Lagos.