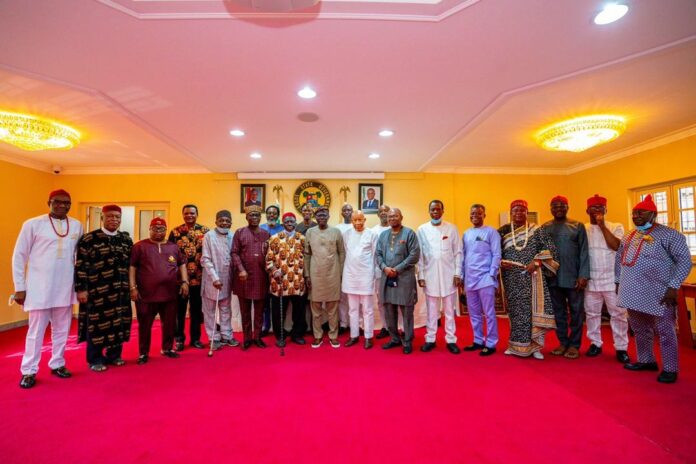 At the end of the meeting, the Governors, among other resolution, appealed the President Muhammadu Buhari to review the appointments of service chiefs and other officers of government to reflect fair representation and banned open grazing of cattle across the seventeen states in southern Nigeria. The Governors also appealed to the President Buhari to convoke a National Dialogue to address the rising ethnic tensions and other associated issues bedevilling the country.

While I concede that the Governors did well for taking collective decisions on several national issues, especially with respect to the ban on open grazing and the call on the President to revisit his sectional appointments, I am of the opinion that their call for National Dialogue is highly unnecessary as it would lead to another round of wastage of scarce resources and time, and would end up as another talk shop just like others before.

Since the year 1942, Nigeria has had different National conferences where people, acting on behalf of their various constituencies without mandate of those they claim to represent, would gather themselves discuss and reach resolutions- without subjecting their resolutions to the people through referendum to test whether they meet the yearnings and demands of the people they claim to represent. Worse still, the resolutions of these delegates are either left to rot in the shelf of the government in power or the government would appoint a committee to look into the report; which will lead to its natural death altogether.

The first national conference that was held for the “Nigerian people” was the Lanchester House Constitutional Conference. This conference, was held in London, United Kingdom and which gave birth to the Constitution of Nigeria at independence, had political leaders and other elites as delegates without subjecting themselves to being selected by the people of Nigeria. Resolutions were reached by these delegates, which formed the basis for our pre independent constitution. The problem with that conference was that the people of Nigeria were not allowed to have a say on those to represent their ethnic nationalities, and they were also denied of the privilege of deciding (through referendum) whether or not the resolutions of the conference met their expectations as a people or represent their interests.

Between the year 1994 and 1995, there was a constitutional conference that was convoked by General Sani Abacha, the then military head of state. The conference was to address the issues in the country with respect to several agitations, and propose appropriate solutions. Abacha’s military administration appointed about 96 delegates to represent the government to the conference, while others were elected along state delineation rather than ethnic nationalities. The conference gulped a lot of resources, resolutions and recommendations were reached. The conference reports were handed over to Abacha, who arrogated himself the power to have the final say rather than subject it to the Nigerian people to decide through referendum whether or not its content was acceptable.

In 2005, the government of Chief Olusegun Obasanjo okayed another round of constitutional conference to still discuss the issues of Nigeria that has lingered since pre independence. The then President alongside other 36 states governors, singlehandedly picked the 400 persons to serve as delegates to the conference to represent over 120 million people without the input of the people. The conference wasted another round of money and made resolutions. As usual, the people of Nigeria and all ethnic nationalities were denied the right to affirm or reject the content of the resolutions through a simple referendum. Instead, the conference report was handed to President Obasanjo without recourse to the people they claimed to represent, who in turn condemned it to a shelf in his presidential office.

In 2014, the administration of Goodluck Jonathan announced convocation of National conference. Just like its predecessor conferences, Jonathan’s government alongside 36 state governors singlehandedly picked delegates for the conference without recourse to the people of Nigeria, who they claim to represent. As usual, the resolutions of the conference was not subjected to the approval or disapproval of the Nigerian people. Instead, it was handed over to President Goodluck Jonathan, who in turn appointed a committee to advice on implementation leading to its natural death.

Considering the aforementioned, it is right to say that the call on President Buhari for a convocation of National Dialogue Conference by the Southern Governors is tantamount to repeating the same thing and expecting different outcome.

The only conference that will lead to solution of the problems of Nigeria is the convocation of a Sovereign National Conference of ethnic nationalities. This conference should have the various ethnic nations in Nigeria electing their delegates, it should be a ‘no hold barred’ summit, and resolutions be subject to referendum in each of the ethnic nations. Other than this, we will continue on our wild goose chase without any end. Despite that the call for a conference with sovereign status has been advocated by numerous stakeholders across the 250 ethnic nationalities that make up Nigeria in the last four decades, successive governments, political leaders and other elites that are benefitting from the incumbent unfavorable system have consistently ignored it.

Conclusively, every unbiased and sane mind will agree that Nigeria’s problem is structural. The various ethnic nationalities and the citizens don’t see themselves as stakeholders in the country because they were neither consulted nor did they play any part in the process that led to the creation and promulgation of the 1999 Constitution, and only a Sovereign National Conference can usher solution.

May God bless us all and bless Nigeria.

Tonye Barcanista is a political commentator and analyst, he writes from Abuja.

I am committed to economic and social development of my constituency – Hon. Amuchie

It is crucial to pass the Electoral Offences Commission bill before 2023 polls.