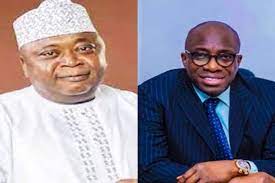 The State Working Committee of the party led by Sikirulai Ogundele conducted their primary at the Olusegun Obasanjo Presidential Library (OOPL), Abeokuta, with Hon. Ladi Adebutu emerging winner, garnering 714 votes out of the 716 accredited delegates.

Another group loyal to Segun Showunmi had theirs at the NUJ Press Centre, Iwe-Irohin House, Oke-Ilewo, Abeokuta Abeokuta with officials from the National Working Committee of the party led by one Hon. Abayomi Daniel conducted the Iwe-Irohin exercise.

Speaking shortly after declared winner of the governorship primary heavily supervised by five-man NWC Election Committee from the PDP National secretariat, Abuja, Independent National Electoral Commission (INEC) and security agents, Hon. Oladipupo Adebutu thanked the resilience of the state delegates for reporting their trust and mandate on him.

Highly elated Adebutu who was accompanied by the State Executive of the party, said his party shall tackle hunger through agriculture revolution and private sector engagement to drive the economy.

The former Federal House of Representatives member said “I seized this opportunity for bringing us this far, it is a tedious journey. It is lacked of compassion and time that makes us as a failed nation. It has caused lacked of empathy and sympathy, I must create hope and environment to believe your tomorrow shall be better. If you believe your today cannot be better than tomorrow, you’ve failed. If your earnings that cannot make you a better tomorrow, we have failed.

“There is a big problem, the first is the problem of hunger in the land. We must go back to agriculture, thank God Ogun state is extensively a rural community, there shall be dignity of labor.

“Let us retool and get commissioned for being a gateway state. All the industries are leaving Ota because the present government has failed. We shall provide electricity and those industries will stay. We shall think and do things differently.

Meanwhile, pandemonium broke out at the venue of the Ogun PDP governorship primary election as faction loyal to Hon. Ladi Adebutu disagreed with the Otunba Jimi Lawal faction of the party over the conflicting delegates list.

Crisis started when the Chairman of the five-man Ogun PDP governorship election committee, Prof. Akase Sorkaa announced the commencement of the accreditation of delegates.

Immediately the delegates from Ogun East entered the OOPL auditorium of the primary, loyalists of Otunba Jimi Lawal raised eyebrows over the authenticity of the delegates list presented by the electoral committee.

The development which forced the INEC officials to momentarily left the venue for about 30minutes.

Trouble started when the certified true copy of the National delegates list stamped and signed by the INEC Headquarters, Abuja and which was a product of the April 30 state delegates election was presented by the camp of aspirant Jimi Lawal for the purpose of accreditation, but PDP members loyal to Ladi Adebutu also presented another list.

In the ensuing controversy over which of the delegates’ list was authentic, discrepancies were noticed on the two lists across 11 Local Government Areas (LGAs) while they tallied only in Nine LGAs.

In what could be described as action movie, military men who are heavily armed engaged hoodlums who allegedly prevented delegates entry into the venue of the primary.

For nearly 40 minutes, gun shots rang out repeatedly, forcing some of the delegates as well as party supporters to flee the venue.

The gunshots were fired by security operatives drafted to maintain peace at the venue, when the agitating crowd became uncontrollable from the two opposing camps.

While the gunshots lasted however, the development gave the needed opportunity for delegates, believed to be loyal to Hon. Ladi Adebutu to gain access into the venue for accreditation which held inside the auditorium of the Olusegun Obasanjo Presidential Library, Abeokuta.

INEC however, returned to the venue, after the state chairman of the party, Hon. Sikirulahi Ogundele had secured the guarantee of the security agencies present.

As at 7:33pm before the commencement of voting, Otunba Jimi Lawal and followers quietly walked out from the venue following the disagreement over the delegates list.